Toxic bro culture, unfortunately, isn’t just a harmless phrase used when “guys are just being guys” at work. It’s actually a plague that can seriously affect your career — whether it’s your confidence at work, whether or not you’re heard at meetings or who gets that promotion.

Toxic bro culture is rampant in business culture and can not only hinder the advancement of women in the workplace, but oust those who try to fight against it. Laura Schwab, former VP at a startup tech company called Rivan, was fired two days after she complained to HR about the company’s rampant “toxic bro culture.” She sued the company and published a blog post about how the company’s culture undermined her and other women.

“Sadly, my story is not unique,” she wrote in a Medium post. “This happens to women all the time….Rivian has a toxic culture and a pattern of marginalizing women, but they are not the only ones.”

Here’s the ultimate checklist to identify toxic bro culture in your workplace: 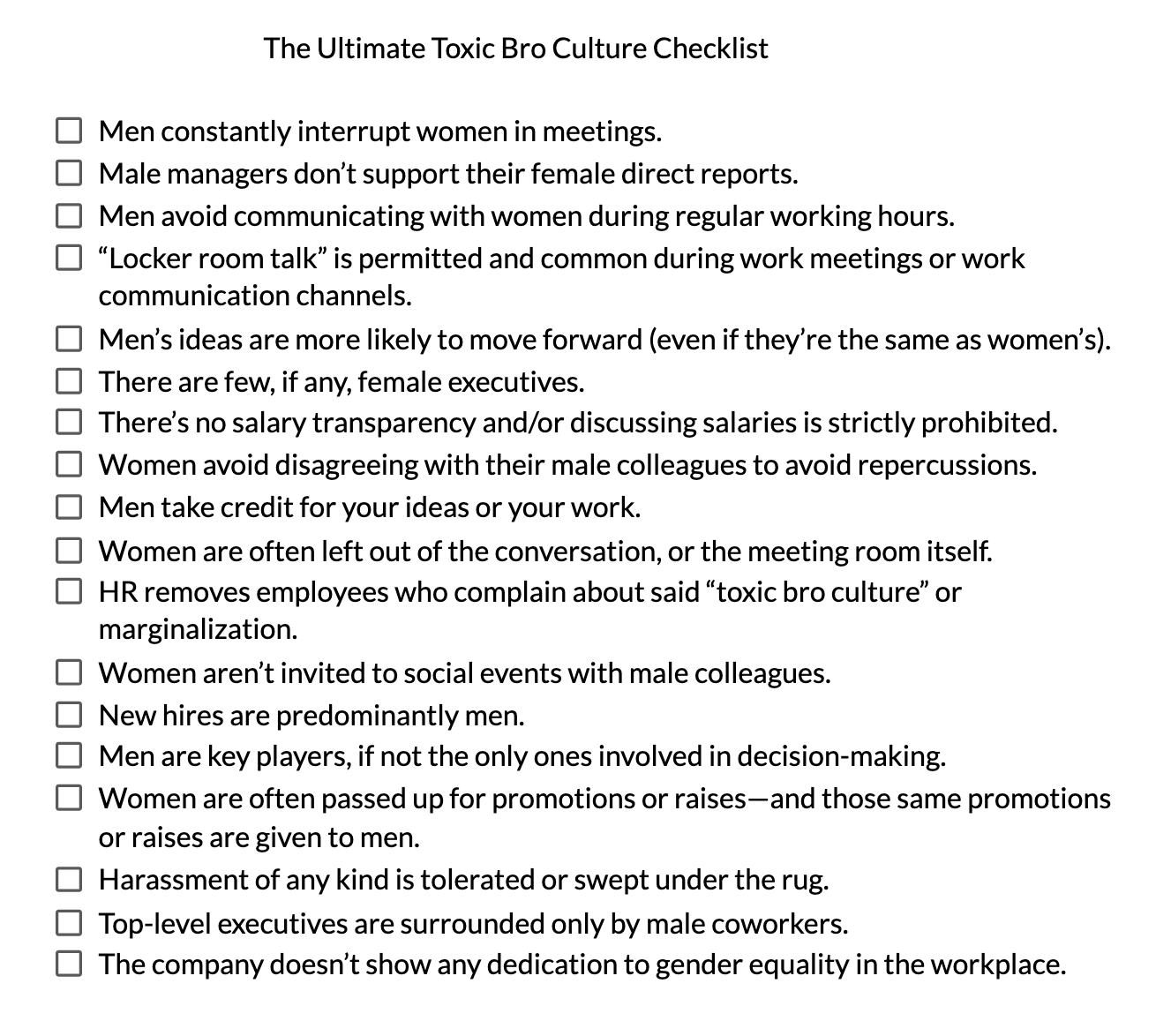 If you checked off more than three of the above, If this type of toxic culture is threatening your career, here’s how to fight back.

1. Make your coworkers, managers and other key players aware of the issue.

Unlike glaring, dangerous issues in the workplace, toxic bro culture might be so engrained at your office that no one even notices it. Start by calling out toxic bro behavior when you see it — whether that’s asking a female coworker to repeat her point when interrupted or asking a man why his sexist joke is funny. If you’re uncomfortable doing so in public, raise your concerns to your manager privately or to HR.

2. Reach out to male allies.

Toxic bro culture can plague numerous people at your office — but male allies can use their privilege to help break through this culture. If you have a male ally you can confide in, start by discussing behaviors the two of you have noticed that contribute to toxic male culture. Then, find ways for your male ally to help you call out this behavior and correct it. For example, a male ally can call out locker room talk in a male-only meeting or praise and support a female coworker’s work publicly on a project.

Toxic bro culture is pervasive and difficult to fight against. It can be taxing, emotionally draining and even scary to combat it — and you shouldn’t have to fight it alone. If you’ve tried raising your concerns already and nothing’s changed, it may be time to look elsewhere — and leave an honest review of the company culture once you’ve moved on to greener pastures.

What are some signs of a toxic “boys club” work culture and how do you fight back?